It’s all hot air. Hot steam, to be exact. But what delicious results! 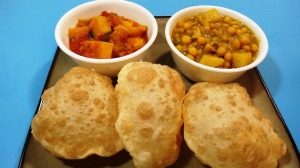 These starchy treats from all over have one thing in common: They became puffy because of trapped moisture which exploded and the starch quickly solidified. And it’s universal, from street food for the poor in India to elegant French restaurants, from mum’s home cooking in England to theaters.

Everyone knows about popcorn, but consider Yorkshire pudding, known in the United States as popovers. This is simply a batter which holds together as it quickly rises, making a crispy outer shell filled with steam. Visit any British supermarket, and you’ll find bins of them in the frozen food section.

The former is truly a poor man’s food, a simple, whole grain bread which delivers an extra wallop of calories (and flavor!) by being fried. You’ll find this humble bread as an a la carte option in many of the world’s finest Indian restaurants, as well as a staple among the poorest of the poor, sometimes accompanied by a stew (meat or vegetable) and serving as a main meal.

A recent street puri sighting was in Udaipoor, Rajasthan, India, on the day of a Hindu festival during which it was especially important for believers to give to the poor. At one temple, a group was gathered making large pots of (VERY appealing looking and smelling) curry, while a man sat nearby cranking out hundreds of puris in anticipation of the meal to come.

On the other end of the spectrum, although very similar in appearance, is the soufflé potato. Having nothing to do with the traditional eggy soufflé, these are simply twice fried disks of potato which puff up to elegant crispness. Rarely found outside of restaurants, pommes soufflés are time consuming and really messy to make, but OH SO good. Curious readers can find several good how-to videos can be found on YouTube. 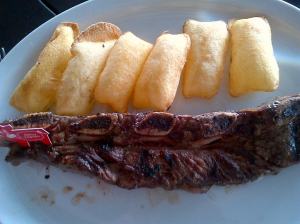 One of myMEGusta’s favorite restaurants in Buenos Aires, Argentina, is La Cabana Las Lilas in the Puerto Madero district, a classic parilla specializing in wood grilled meats of all sorts. What makes this dining experience really special is their signature pommes soufflés, perfectly executed every time. http://restaurantlaslilas.com.ar/EN/

One thought on “Puffy Puris Popcorn Popovers and Pommes Souffles”