No, we are not talking about lichens and water purification products for when you are inadvertently lost hiking in Sherwood Forest.

This is a much more realistic challenge: Finding something decent to eat when visiting the National Parks, never what anyone would consider foodie meccas, but surprisingly good if you order well.

Having recently visited Yellowstone and Grand Teton National Parks, myMEGusta found quite a bit of better than average eats in and near them. But, unlike when visiting a national treasure like the Eiffel Tower in Paris, France, or the panda preserve in Chengdu, China, eating well required a little effort.

Jackson Hole, WY, considered a gateway city for these parks, and also a mecca for moneyed skiers (the international airport in this little burg fills up with private jets every winter), provided an encouraging start to the journey. Of course, being a normal town, nothing there was under the auspices of the National Park Service (Happy 100th Birthday!) concessionaires, and restaurants ranged from frighteningly pedestrian looking to really excellent.

Local, a restaurant focused on fresh local ingredients, is a case in point. http://localjh.com/ After a terrific lunch of smoked local trout Salad Nicoise (the inspiration for September 8th’s posting), myMEGusta went out for a short (that’s all there are in Jackson Hole) stroll, and stumbled upon Local’s retail butcher shop, more of a little deli/take-out joint, but interesting all the same. Sitting in the case were the most gorgeous pork rib chops she has seen outside of Europe: Relatively small in diameter, cut thick, a deep red hue.

Of course, that meant getting a reservation to go back for dinner, and it was one of the best meals of the trip: Snake River Farm Kuributa Long Bone Pork Chop with a Bourbon Glaze over Roasted Peaches. A breed of Berkshire pig, this specific one from the Kagoshima Prefecture, Japan, also known as “Kagoshima black pig”. http://www.snakeriverfarms.com/ The watermelon salad, graciously served as a half portion, was terrific, too. 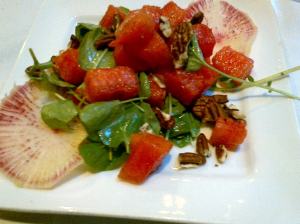 Tempted to go back the next day for a third round, myMEGusta chose instead the local “hot” restaurant, the Snake River Grill. They somehow managed to overcook and underseason locally farmed Snake River Rainbow Trout, something to write home about, but not in a good way.

The good news was that fresh grilled trout was ubiquitous in the park lodge restaurants, and considerably better at every other attempt, including the second one at Jackson Hole’s Wort Hotel,     http://www.worthotel.com/ , where it was delicious.

Another highlight was at the Jackson Lake Lodge http://www.gtlc.com/dining in Grand Teton National Park: Colorado Rack of Lamb. There was nothing fancy about this: Two perfectly cooked (medium rare, as requested), extremely flavored chops (a “just right” portion). Most lamb sold in the US is from Australia and New Zealand (both excellent, by the way), so it was a real treat to have American lamb, outrageously expensive on the East Coast.

Partridge was another treat at the Jackson Lake Lodge. Not an easy bird to cook, it tends to dry out quickly, so its juicy, perfectly cooked texture was a pleasant surprise.

The real wilderness “win” was the bison burgers, found everywhere and lean, but still juicy, when ordered medium rare. We were advised by a local authority that it’s really hybridized beefalo, which is fine, and makes sense given that bison (what are often referred to as buffalo) are wild, dangerous animals, not realistic for domestication. 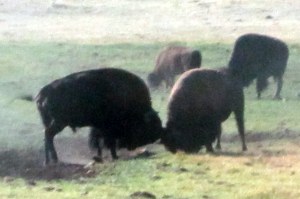 Another pleasant and reliable dish is plain old chili (think cowboys around a chuck wagon campfire). The version I tasted in the Prospector Restaurant in Cooke City, Montana http://cookecity.net/webcams/ was a fresh, flavorful beef/bean concoction (and the side of Tabasco made it chili-like). What would have gotten sent back in Austin, TX, was a good lunch in the Wild West.

One thing myMEGusta had eaten, but never really ordered, is Buffalo Wings. Deciding with trip companions to have appetizers in the bar rather than crossing over to the Mammoth Hot Springs Lodge dining room, she chose the wings, beautifully enough presented and golden brown enough for passers-by to stop at the table and comment. Pretty good for “defensive dining,”

Moving East, the Jordan Pond House at Acadia National Park used to serve fantastic steamed lobster and was famous for its popovers, a perfect snack after hiking. Readers who have visited in recent years can weigh in on whether or not these treats still exist.

The bottom line is, keep it simple and local, and you’ll up your chances of eating well.

And, speaking of treats, the moose shaped butter pats and moose motif waffles at Jackson Lake Lodge were silly but fun!

What’s So Nice About Salade Nicoise?

It started off simply enough: A cold dish of oil packed canned tuna from the Mediterranean garnished with tomatoes, anchovies, hard boiled eggs, and, of course, tiny, briny Nicoise olives. Some chefs included red peppers, shallots and artichoke hearts, and it usually arrived on a bed of greens, all dressed in a light vinaigrette.

While myMEGusta is usually all in favor of “truth in menu”, the ubiquitous Salade Nicoise we see today has strayed so far from its origins that it hardly matters any more. This is one item where you really do have to read the menu description in detail to avoid surprises. 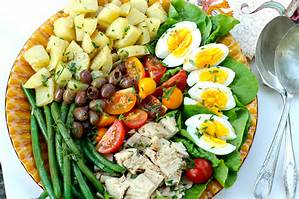 For example, you rarely see the red peppers, shallots and artichokes now. Chefs often bow to consumer qualms and leave out the anchovies. On the other hand, it always arrives with cooked potatoes, usually with cooked green beans as well, despite an early historical reference to “no cooked vegetables.” All to the good, if you ask me. Even better when they eliminate the hard boiled eggs.

So, what happened here?

Having originated in, or been named for,  the French city of Nice, sadly the scene of a recent tragedy, this dish represents the tastes of the Mediterranean. Julia Child can be credited with really popularizing it in the United States, and her preparation used potatoes and green beans. This leads myMEGusta to believe that her version was served in plenty of French restaurants and homes, and, while not historically perfect, a very accurate rendition of what real people were eating and enjoying in her days there.

Not so long ago, really good canned tuna was appreciated by everyone, and you’ll still find it in gourmet shops everywhere. Now, this is neither the virtuous water packed albacore which most people seek out today for their mayonnaise laden tuna salads, nor it is packed in insipid mystery oil that needs to be washed off before using. Oh, no, this tuna is packed in top quality extra virgin olive oil, and that olive oil goes straight to the plate to be sopped with crusty bread, or made into a vinaigrette.

Nowadays, you’re more likely to find a Salade Nicoise made with seared yellowfin tuna. By the way, this makes for a really excellent dish. 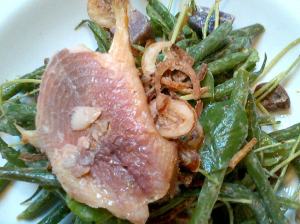 The restaurant is called “Local”, http://localjh.com/ , and this is what we call good cowboy dining!