My first (and only, hopefully only) experience with being challenged at Customs involved a package I was asked to bring from Paris many years ago.  I witnessed it being packed, and it never occurred to me that I’d be stopped because of it.

Nor that a 20 something with a mysterious package would raise suspicions.

When challenged by the authorities at immigration, I was honest about the contents. The questioning escalated. Perhaps they were giving me a chance for a reduced prison sentence by confessing.

When the increasingly hostile Customs inspector finally unwrapped the package, his horror was palpable as smelly juices ran all over his work station. Offensive, indeed.

“I TOLD you it was salted sardines.”

Everyone talks about sardines, but let’s be honest.  Other than the food-loving readers of myMEGusta, I’ll wager that most people who use this phrase, particularly when referring to the NYC subway system, have never personally opened a can of sardines. 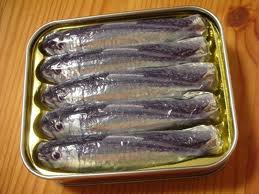 Rush Hour on the IRT

And that’s a shame, because these little fish are loaded with vitamins, minerals and omega-3s, and they make for a quick, delicious lunch, especially if partnered with some crunchy bread.

Parisian bistros offer them (yes, out of the can) as the first course in prix fixe menus, and “artisanal” canned sardines are to be found at tony food stores here and in Europe.

Named for the Italian island Sardinia, the true sardine is a small type of pilchard, a fish more widely known in Europe. Sometimes, the least expensive canned “sardines” in supermarkets are really little herrings or sprats, but tasty all the same.

Sardines on the Hoof

They occasionally show up fresh at the fish market, and are a treat on the grill, with a little salt and pepper, maybe olive oil.

Another classic within our grasp is the famous Sicilian pasta con sardo, made of fresh sardines (although good quality canned will work just fine), raisins, fennel and other ingredients depending on who your a) cookbook author or b) Sicilian grandmother is. 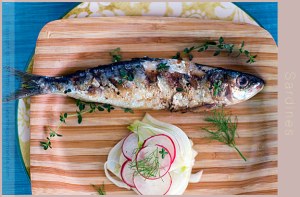 Hot off the Grill

New Orleans is what I think of on Fat Tuesday, although Venice and Rio also have amazing traditional festivities on this day before Lent begins.

The two most notable cuisines of New Orleans are Creole and Cajun, although the line between them  can blur, particularly as chefs get creative and tastes evolve.  Based on visits some time ago, Commander’s Palace would be my favorite for Creole style, and K-Paul’s Louisiana Kitchen for Cajun.

Creole cuisine can be deliciously complex, often rich, and is based on the mélange of cultures who settled in Louisiana: people from France, Portugal, Spain and Africa. French cuisine is its closest relative, and many classics of Creole cuisine have French sounding names like Etouffee and Remoulade (which bears little resemblance to its Gallic namesake).

Cajun can be complex as well, but is more earthy and evokes the memories of struggles in a new country as immigrants from Acadia (“Acadians” morphed into “Cajuns”), also French speaking, learned how to adapt to their new environment and ingredients.

Think of Redfish with Lump Crabmeat Hollandaise and you’re thinking “Creole”. Think of Blackened Redfish, and you’re in Cajun territory.

Okra is a favorite of mine in any cuisine, and it’s a staple in New Orleans. Calling okra “gumbo” is a common misnomer. Gumbo is a stew. Okra is sometimes an ingredient, its gooey texture serving as a thickener. Ground sassafras, also known as file powder, is another thickener, as is roux (flour/butter paste), and sometimes a gumbo will contain all three.

Beignets, French doughnuts with a sprinkle of confectioner’s sugar, are another glory of New Orleans and at their best at Café Du Monde with a cup of café au lait made with their signature coffee/chicory blend. They’re available elsewhere, and you can take home a box of mix. In my opinion, they are a treat worth the fat and calories, but only if enjoyed on the spot, hot from the fryer.

Andouille sausage is another favorite with French origins, but with little in common with its forebears. The delicious andouille sausage of Louisiana is part of the Cajun repertoire, hot and spicy, and traditionally made of pork, although chicken and turkey versions are available for the health conscious. They bear no resemblance to French andouille and andouillette both made of pork chitterlings (intestines).

Bananas Foster, a dessert classic which sounds innocuous enough (How bad can a banana be for dessert?) is a great example of New Orleans decadence: bananas braised in butter, brown sugar and banana liqueur, flamed in dark rum and served over ice cream.

How perfect is that for Fat Tuesday?

You Ordered The WHAT?

There’s a lot of fun to be had in the names of foods.  Some can sound terrible, even disgusting, and be just delicious. Some dishes can have names that have nothing whatsoever to do with what is in them. And some are just funny.

When’s the last time you saw Crapaudine (crap-oh-DEEN) on a menu?  There is a reason this dish doesn’t get out much: Who wants to ask for something that sounds that rude?  Worse, if you know a little French, you realize that it means “toad style”, sometimes interpreted as “frog style,” and I’m not talking about the legs. In reality, it’s just a small bird, usually squab, quail or chicken, flattened so that it will cook evenly and make a nice presentation which, by the way looks a little like a toad.

How about some Stinko instead?  If you’ve enjoyed osso bucco, braised veal shank slices, you’ve been close. Stinko is simply the whole shank, usually served by carving long slices with the grain, tender because it’s been cooked so long.

Had any Tinkling Bells lately? This is a relatively simple Chinese dumpling like dish of seasoned pork wrapped in bean curd and deep fried. The name comes from the crunch you should hear when biting into it.

Then there are the things that just sound unappealing, combinations that simply should not be.

Chicken and Waffles is one of these.  If you’re from the North, this sounds bizarre, but in reality it’s a favorite of Southern cuisine. We don’t think twice about combining fried chicken with cornbread or biscuits, right?

I was reminded of this treat when filling out a Facebook quiz: The Food List Challenge, 100 Foods to Eat Before You Die. The food referenced in the quiz, Chicken and Waffles, is not just a random choice of things one might eat at two different meals. Rather, it is a classic pairing, a heavenly juxtaposition of crispy fried chicken on the same plate as waffles with butter and some kind of syrup.

My introduction to this delicacy was at the Brown Sugar Kitchen in Oakland, CA (www.brownsugarkitchen.com/). I was skeptical, but then the impeccably buttermilk fried chicken arrived shatteringly crisp and greaseless, accompanied by a giant, extremely crunchy waffle, brown sugar butter and apple cider syrup. One bite and I was in love.

The combination of salty/sweet/crispy was amazing, akin to kettle corn but with the added complexity of the perfectly seasoned, juicy chicken. Of course, the chicken has to be perfect, as well as the waffles.

Some things have confusing names.  Nobody thinks that spaghetti sauce is made out of pasta, and everyone knows that lobster sauce in a Chinese restaurant is a sauce meant to serve on lobster.

But I recently heard Chris O’Reilly interviewing one of his young musicians on his NPR program, “From The Top” (www.fromthetop.org/) and going on and on about duck sauce and ice cream actually went together. Of course they do; it’s not a sauce made out of duck, it’s a sweet, fruity condiment meant to go with duck.

Usually the skeptic, I found out how wonderful this can be in Hong Kong in the 80s.

A knowledgeable friend who knows the Far East advised that the best was to be found in the top hotel dining rooms.

The best chefs were doing their magic independent of the green eyeshades: the F & B’s (food and beverage cost control functionaries). Ingredients were impeccable, kitchens were the cleanest (an issue at the time), and fancy hotels were reaping a huge public relations benefit while the chefs benefited from the traffic and location.

More recently, when in Chengdu, China, I made the Shang Palace in the Shangri-La Hotel my favorite spot for dinners when on my own, enjoying superlative food, whether the Cantonese classics or local Szechuan specialties. On my third night, the manager asked if I had moved in.

The croissant I had last year at the Hong Kong Mandarin Oriental Cake Shop rivaled the best I’ve had in Paris.

In the past, it could be assumed that the great hotels would have excellent dining. Take, for example, the Waldorf Astoria’s restaurants when Arno Schmidt was executive chef. Some places, like the New York Mandarin Oriental, still deliver a wonderful restaurant experience.

But most hotel dining has a well-deserved reputation for expensive mediocrity. The tides are, in some cases, turning. Taking the elevator instead of a cab is no longer necessarily a compromise in the United States.

An excellent example, and inspiration for this blog, is Distrito, celebrity chef Jose Garce’s confection in the Saguaro Hotel in Scottsdale, AZ. His “new twists on Mexico City street food” are almost universally delicious, and better than most of the competition in Old Town. Ceviches and salads were the standouts.

So, don’t automatically write off the hotel dining room. Find out who the chef is and check the local reviews. But, if the menu is pedestrian, take a walk.

PS The comments about the impact of cost control on food quality (they’re just doing their job, like the executioner in A Tale of Two Cities) have nothing to do with the wonderful FnB restaurant in Scottsdale, AZ, chef Charleen Badman’s jewel in the desert.