We all know that the ubiquitous black pepper grinds have nothing to do with bell or chili peppers, right? (*Scroll down if you don’t…)

But, did you know that black peppercorns originated in Kerala State in Southern India, where they still grow wild? Vietnam is now the leading global producer/exporter of traditional peppercorns, but they are still a very important crop where they first grew.

Peppercorns on the vine in India

On a recent visit to the village of Komarakom, situated in the middle of a giant rice paddy and Lake Ashtamudi, the largest in India, myMEGusta saw peppercorn vines slinking up trees, looking very innocuous, although the unripe, green corns are very powerful (which she learned a few years ago dining on a green peppercorn garnished Thai Curry in Bangkok, and won’t make that mistake again).

The green corns mature and are dried to make this very familiar spice. But what about the other kinds of peppercorns? 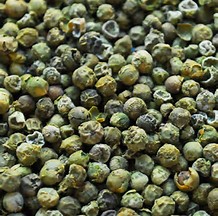 White peppercorns are merely regular ones whose hulls have been removed. They have a slightly different flavor than the black, but are mostly used when a dish, such as a French Bechamel (white sauce) would suffer cosmetically from black flecks.

Dried green peppercorns are less common (and not a myMEGusta favorite), but can be found at retailers such as www.penzeys.com . They are also available packed in brine.

Szechuan peppercorns, or numbing peppers, are not peppercorns at all, rather an unrelated species, and it is the “pericarp” or exterior hull which is used in cooking, and as an ingredient in classic Chinese Five Spice powder.

Pink peppercorns are natives to South America, and are the dried berries the Brazilian and Peruvian pepper trees, not remotely related to any of the other peppers.

They all play together nicely in spice blends which make for an interesting grind on some dishes if you’re looking for a change from the everyday. A four pepper blend will contain black, white, green and pink; the five pepper blend usually contains allspice, not a pepper at all but tasty.

But, please don’t ask myMEGusta if she wants “fresh ground pepper”! What is that, instead of the stale stuff you usually serve?

*The vegetable peppers, ranging from paprika peppers in Hungary to Italian peppers to mild green/red/yellow peppers to fiery Indian dried chiles, are native to the Americas, and are part of the culinary diaspora started by Christopher Columbus. Like potatoes, they were eventually embraced throughout the Old World, to the degree that most people (including people who live there) do not know that they are imports.

One thought on “Perky Peppercorns”