Terraced vineyards in the Douro Valley

Tasting wines where they were grown is a wonderful aspect of travel, whether in Europe or California or Australia, to name a few favorites. A highlight of myMEGusta’s springtime trip to Portugal was a stay and tour at the beautiful Quinta do Noval, http://www.quintadonoval.com/ , a Port wine house in the Douro River Valley, inland from Porto (or Oporto), the country’s second largest city.

Port is usually consumed after dinner, perhaps with cheese or dessert, or perhaps on its own (preferably doing something like gazing at the river traffic and passersby in a sidewalk café, or, in a different season, in front of a crackling fireplace).

It’s one of several categories of fortified wines, meaning that distilled alcohol is added at some point in the vinification process. In the case of Port, the fermentation is stopped before all the natural grape sugar has been converted to alcohol. This is done by adding an unaged, clear grape distillate called aguardente, similar to grappa. This kills the yeasts while raising the proof higher than that of a normal table wine. Interestingly, this liquid is usually referred to as brandy, but is bears little resemblance to the aged brown spirit that goes by that name.

Much of the Port process is done by hand: The Douro Valley’s, steep terraced vineyards necessitate hand harvesting, without the luxury of mechanical harvesters.

Where the stomping happens

And, in the case of the tip top of the line vineyards and bottlings, it’s done by foot, too. This is one of the few places in the world where there is a formal stomping ritual, done in very specific patterns and rituals. Only the grapes destined for the highest echelon of Ports get this luxury; the rest of the crop are crushed mechanically by machines designed to replicate the old fashioned method. 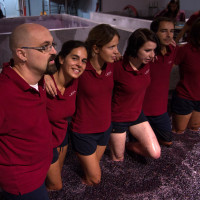 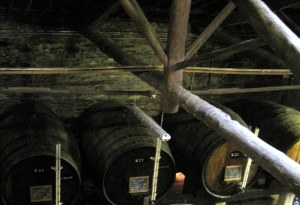 After crushing and fermentation, the wine is aged, in some cases (see “upper echelon”) in barrels in a cellar adjacent to where the grapes were crushed, until the space is needed for the next harvest. All Port is then moved to the historical Vila Nova de Gaia, a city across the Douro River from Porto, where the traditional Port houses’ lodges, their aging cellars, are line up overlooking the water.

It used to all be shipped on boats known as barcos rabelos and some are still parked in the shadow of the Eiffel (yes, that Eiffel) Bridge. Today, they exist for show and the occasional race or joy ride, since the river is no longer navigable due to hydro-electric projects, so the wine rides in trucks and tankers.

There are many, many kinds of Port, particularly since the important houses all have their own proprietary blends in addition to the traditional categories. Two outstanding examples of this are Noval Black and Sandeman Founders Reserve. Ports are sweet (because of the residual sugar, never with added sweetener) but not necessarily cloying and can be incredibly nuanced based on the blend of grapes, production methods, and, very importantly, how they have been aged and how long:

Ruby – Describes its shimmering, deep red color, and has had minimal aging

Tawny – Has a mahogany tinge, has been barrel aged for ten to forty years, and has thrown off its sediment; the best will indicate the average age of the blended wines before bottling (myMEGusta’s favorite!) 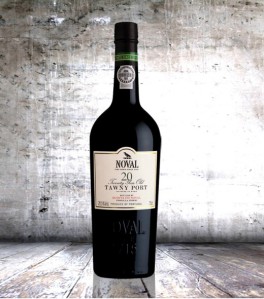 Vintage – Made in the best years, only stays in the barrels for a couple of years and proceeds to age in the bottle, throwing off considerable sediment, and thus requiring careful decanting

Late bottled vintage – Aged longer in the barrel, then bottled, ready to drink sooner and has little or no sediment

Port is always in season, but the fall and winter are myMEGusta favorite times to indulge in this exquisite treat!