No, these are not variations on the cha cha or requiring disco balls and bad hair.

These are two of the most famous Latin American spirits, long living in the shadow of tequila and rum but now emerging in their own right in the United States and best appreciated in their signature drinks.

Cachaça (pronounced cah-SHAH-zah) is the classic spirit of Brazil.  Made from fermented cane sugar, it is similar to rum (made from molasses) but has a more assertive flavor. 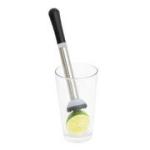 The Muddler – Also a handy tool for old fashioneds and mojitos

My initial encounter with it was at the Discophage, a long deceased Brazilian restaurant in Paris (which readers may recall from reading about the bean dish, feijoada, on May 15, 2012) where caipirinhas (ki-pah-REE-nyas) were made one by one: muddling fresh limes with sugar then adding cachaça and stirring with ice. Because the lime rinds are in the drink, and get crushed, you pick up a delicious accent when the lime oil is released.

Sadly, while real caipirinhas are available in good Brazilian restaurants, most of them push the use of vodka instead of the real deal, for a “milder” drink. This is a shame, as they are usually the same proof (alcoholic strength) and cachaça gives a much more interesting flavor to the cocktail.

Another less well-known use of cachaça is in drinks known as batidas (bah-TCHEE-das), infinitely variable blends incorporating fruit juices, and usually coconut milk or condensed milk. These are delicious, refreshing and laden with calories.

Moving to the West coast of South America, we come to pisco (PEE-skoh), a grappa-like unaged grape brandy, claimed by both Chile and Peru as its own.

The most popular way to enjoy pisco, in both countries, is the pisco sour – a mélange of pisco, sugar, lemon juice and egg white (for the froth) shaken vigorously or blended with ice and garnished with bitters.

My initial encounter with an alleged pisco sour was at the Santiago Hyatt on the eve of a flight to Ushuaia, the southernmost city in the world where our group would board a ship for Antarctica. Alas, made in bulk for a large reception, it was just OK, a pleasant enough beverage but nothing special.

The next time was in Mallorca, Spain, made by a native of Peru with pisco from Peru. And it was delicious. But, the mixologist was not happy; it wasn’t good or authentic enough, in part because there was no blender in the villa. “You have to try this in New York at a good Peruvian place.”

And the pisco sours at Pio Pio (at least in the Hell’s Kitchen branch) are heavenly.

I can’t wait to try one in Lima!